How to Block and Unblock Someone on Messenger

Please note that blocking someone on Facebook is different from blocking people on Messenger. People do change from time to time. Sometimes you must be connected with a person and would love to talk to each other. But it is possible that after a couple of weeks/days/months you don’t the event wanna hear his/her name. That is where this feature/tool comes in handy. However, you can easily ignore them on Messenger, instead of blocking them.

What happens when you block someone?

Whenever you block someone on Facebook Messenger, you guys are no longer connected. That individual can no longer send you text messages, calls, video calls, etc. Also, both of you can no longer see each other profiles on Messenger.

Also, note that blocking someone on only Messenger doesn’t block that individual on the entire FB platform. You definitely need to get rid of that person everywhere to not see him/her again.

Related for You
Messenger

Fix This Person is Unavailable on Messenger But Not Blocked

How to Change Language in Messenger [2023]

What is Messenger Bump Message & How to Use it?

How to Restrict and Undo Restrict Messages on Messenger

On the blocking page of the Messenger app, you must see two different things that block messages and block on Facebook too. If you block someone on Messenger only, it means that you guys will be able to:

However, if you block someone on Facebook too then you guys are completely gone away from each other on both Facebook and Messenger. Blocking somebody on Facebook means unfriending.

I may keep writing about the difference the whole day but the above-mentioned are the major things I thought you may need to know.

Can the blocked person send you a message on Facebook?

Nope and never the person you have blocked can send you any messages. Moreover, this is for both of you. Meaning, even you can no longer send that individual a message until you unblock him/her.

How do you know if someone has blocked you?

Facebook doesn’t make it transparent if someone has just blocked you on Messenger. Facebook won’t inform anyone about blocking or ignoring. As per Facebook, it is just to keep things private (I don’t even understand what it means).

When you open a conversation on Facebook Messenger and see “You can’t reply to this conversation”  in the app or “This person isn’t available right now” on Messenger.com. It clearly means that someone has just blocked you on Messenger. Moreover, you may still see these kinds of notifications if somebody has deactivated their Facebook account.

Bonus tip: An alternative way to find out if an individual has been blocked is to ask a friend or use a fake profile and send him/her a message. If you or your friend can send the message, then listen to me very carefully – you have been blocked.

Can the blocked person call you?

Let me say, the answer is No again. For your information blocking people on Messenger is like you are completely and will have no interaction with each other. Some users ask me a question on Quora, is it possible to call someone after blocking them just like WhatsApp? The answer is no and never, Messenger is not WhatsApp, right?

Does blocking someone removes a conversation

Never until you do it yourself. Facebook Messenger never removes a conversation even if you block or ignore someone. The entire conversation is still available to you and the person you have blocked. Both of you can read it even if it is a secret conversation. Note that ignore doest move that conversation to the hidden inbox on Messenger.

Can a blocked contact see my active status on Messenger?

The simple answer is NO. Both of you guys can no longer see each other active or online status on the Messenger platform.  It is impossible for both parties. Moreover, there is an alternative way to keep an eye on the blocked person from 2nd or fake Facebook profile.

How to Block Someone on Messenger

Here is how to do it.

Step 2: Tap the info icon at the top right corner in a conversation.

Step 4: Tap Block Messages from (name of the person) toggle on.

Step 5: Confirm the action by tapping on the BLOCK on the next popup.

Block Someone on Messenger.com

Step 2: As you can see all the conversations listed on the left side, click the three horizontal dots right to a conversation by hovering the cursor on it.

Block Someone on Messenger on iPhone

You can easily block a person on Messenger using your iPhone. Simple go to a conversation with that person. Tap the name of the person at the top. Scroll down and tap Block, confirm the action and you are good to go. The person now blocked.

How to Unblock Someone on Messenger

Sometimes you may change your mind and think to unblock the blocked person on Messenger. But the question of how you will do it? Don’t worry I am here to help, to unblock someone on Facebook Messenger please follow these steps:

Step 2: Tap your profile picture in the top left corner.

Step 4: Select a person you want to unblock then tap the Unblock icon next to Unblock Message and Calls. 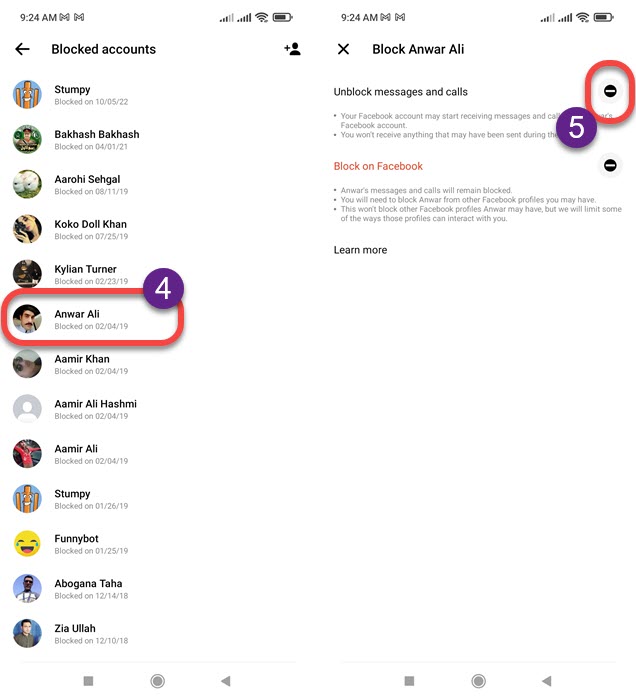 Unblock Someone on Messenger on iPhone

You can easily unlock a person a Messenger on iPhone. Open the Messenger app. Then tap your profile icon at the left. Tap Privacy & Safety. Now tap Blocked Accounts. Tap the name of the person you want to unblock. Finally, tap “Unblock Message and Calls”, that is it.

What happens when you unblock someone?

Subscribe to our newsletter
Sign up here to get the latest news, updates and special offers delivered directly to your inbox.
You can unsubscribe at any time
You might also like More from author
Messenger

Fix This Person is Unavailable on Messenger But Not Blocked

How to Change Language in Messenger [2023]

What is Messenger Bump Message & How to Use it?

How to Restrict and Undo Restrict Messages on Messenger

How To Fix Messenger Not Showing Active Friends

How to Add or Remove Custom Status on Messenger

How to Send Music MP3 Song on Messenger

Save Voice Messages from Messenger on Mobile/PC